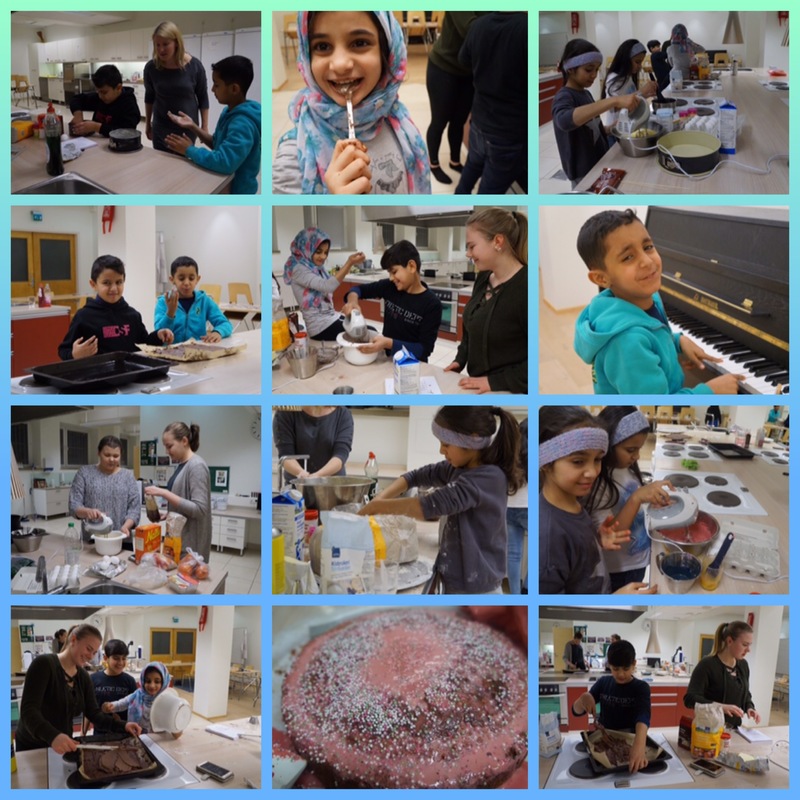 We publish this picture with the permission of the childrens' parents. Thank you Yousre for translating the paper into Arabic.

In our discussions, two environmental challenges kept coming up. One observation was, that young people buy quite a lot of clothes. Some of them are cheap and don't last very long, others are soon forgotten in the drawer. Another observation was the tremendous amount of food waste that we produce in our households and generally in society. We learned, that the amount of food waste is tolerable at our school canteen, except for the special diets. When there is something delicious on offer, some students temporarily forget, that they are vegan, and there is food left over. Each of us have observed, that despite efforts against it, there is often some food going bad in our own refrigerators. We decided to tackle this. 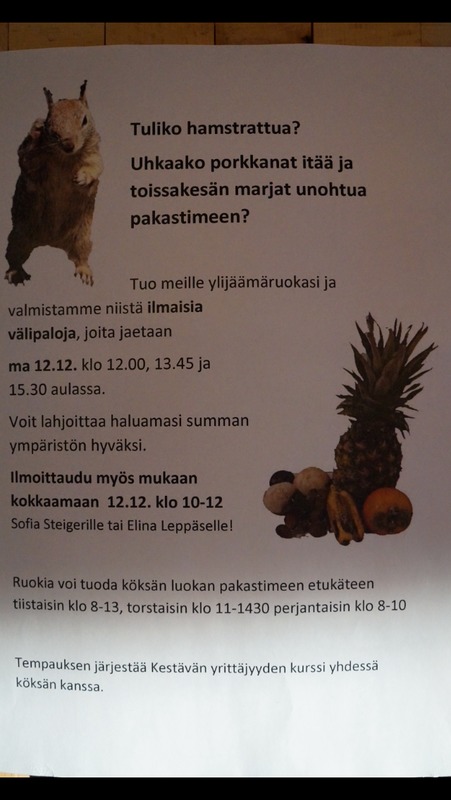 This is our advertisemet for the event. It asks: "Did you hoard too much?"

On Monday, December 12th we organised a "waste food day" at our school. In cooperation of our cookery class teacher we called for students to enroll for cooking with us from 10-12 o'clock and to bring any food from
home, that was in danger of going bad - such as sprouting carrots or last year's berries from the fridge. Unfortunately, no one enrolled, so we asked for participants from two schools for children with special needs and another upper secondary school in the region. It was on too short notice this time, but we agreed to develope something together in spring. In the end, we asked our little friends, who are seeking asylum in Finland. They embraced the proposition with shiny eyes!

Our students went around in stores describing our event and asking for sponsors. One store and a kiosk gave us bags and cardboard boxes full of food, candy, crisps, chocolate, pastries, energy bars, milk, coffee, yogurt and what not! Both of these sponsors want to continue working with us. 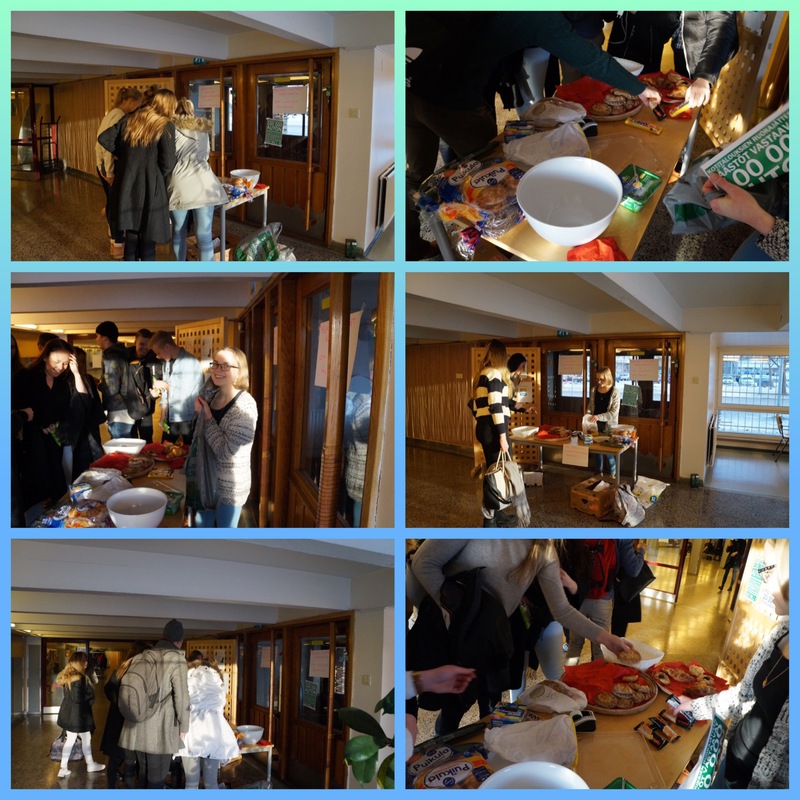 Saving food from the bin at our stand in the school lobby.

The ready food was given to students for free, and most of it was gone within 10 minutes. The students could donate some money for an environmental cause, but this was voluntary. Our main goal was to raise awareness. We saw a lot of happy faces on this day! On the 12th of December the test week was about to begin, and the students had a lot of learning to do. The snacks were welcome for sure! A big thank you to our sponsors! 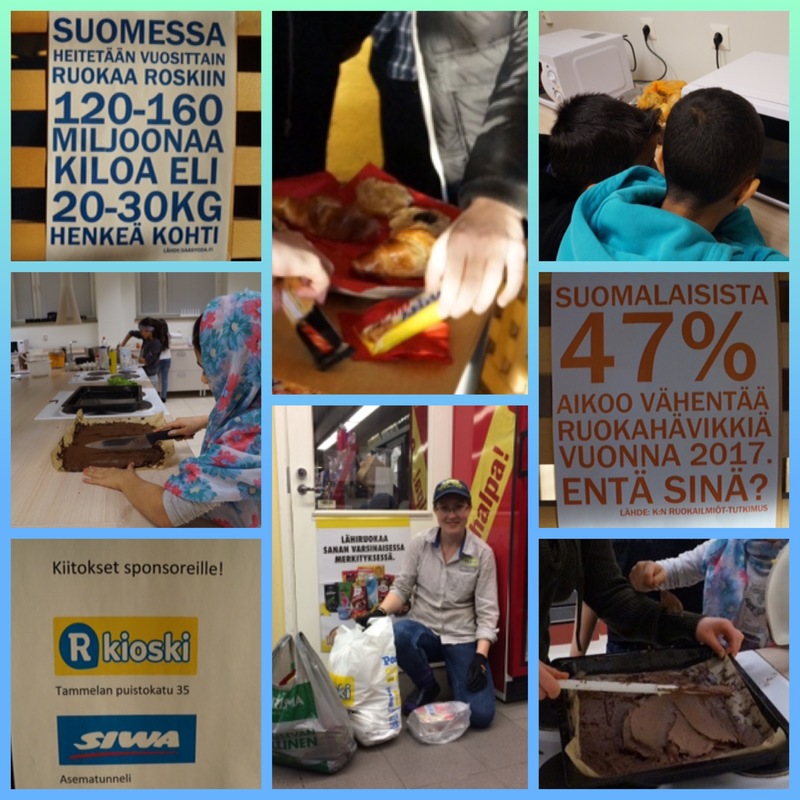 This is a compilation that we made as a thank you to our sponsor.

The friendly entrepreneur from the kiosk also brought last christmas' rutabaga casserole from home, which we turned into a bread. Her ham casserole was turned into a salty pie, adding some leftover cheese etc.

We spent three hours baking with our adorable Iraqui and Kurdish friends. It was a lot of fun and there were a lot of chocolaty, smiling faces!
0 kommenttia
On the 25th of November you can choose between Black Friday or Buy Nothing Day.

We chose to hear the lecture "Helvetin hyvin menee - It's going as good as hell", which was organised in connection with the waste reduction week in Tampere. In the panel there were Professor Esko Valtaoja and Osmo Soininvaara, Member of Finnish Parliament (The Greens). They talked about the relation of happiness, consumption and natural resources.

The event was organised next door to our school by Ekokumppanit and Pirkanmaan jätehuolto (Tampere Regional Solid Waste Management) from 6-8 pm.

At the beginnig of the event a representative of Pirkanmaan jätehuolto pointed out, that the inhabitants of the region Pirkanmaa produce 100 garbage trucks of waste per day. It was surprising to hear, that single days like Christmas do not stand out at all in these scales. The amount of waste that we produce remains unchanged from year to year, although there are efforts made to reduce it. The only thing which will show to some extent in the amount of waste is recession.

First, we saw the following video by Esko Valtaoja:

In the video Esko Valtaoja says, that the world is doing better than ever in many ways. However, if everyone lives like us Finns, one Earth is not enough. Humanity holds the keys to our problems and he seems to trust, that we will use those keys as well. One of the answers is circular economy. As an example, he mentions the Finnish recycling system of beverage bottles. Imagine that we could be equally efficient in other fields!

According to Valtaoja we pay far to much attention to "the storm on the surface", like Brexit and Trump. The darker the figures the more credible they seem to appear to people. Despite negative headlines the deeper currents are taking us to the right direction. 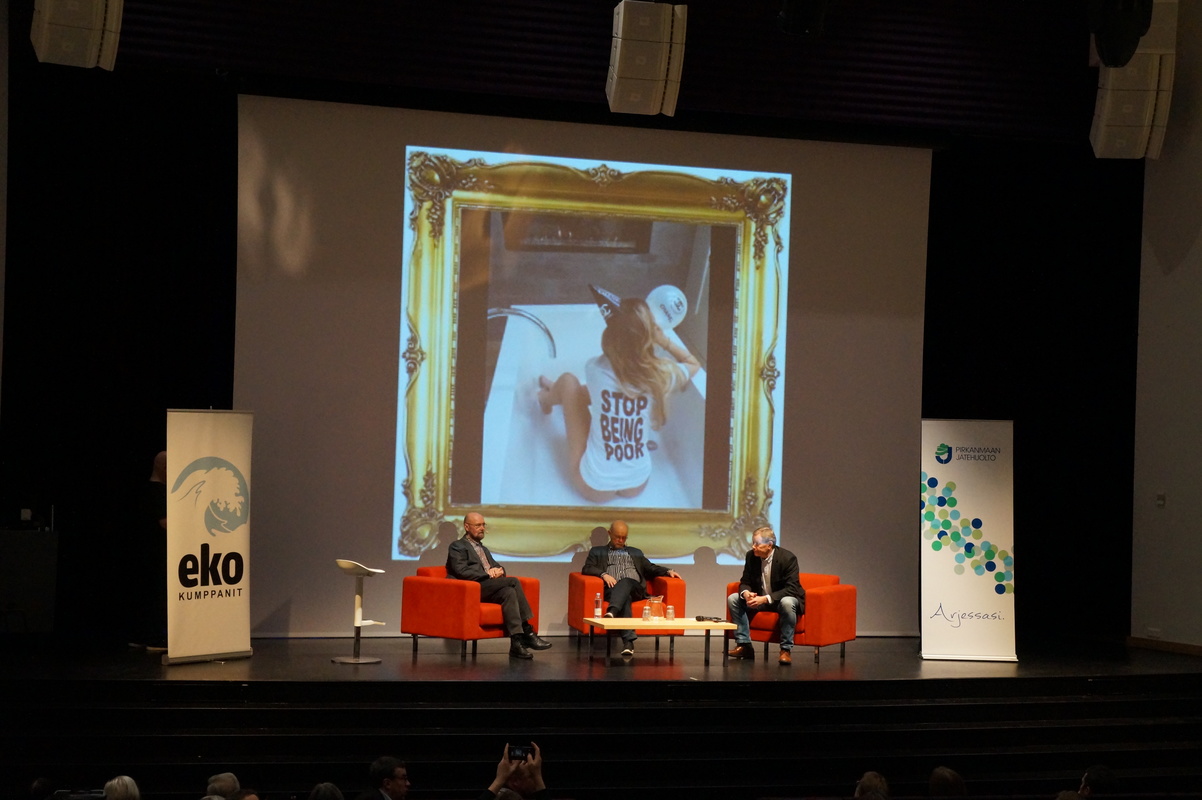 Osmo Soininvaara asked, what the difference between an optimist and a pessimist is.

- The optimist is of the opinion, that we live in the best time ever. The pessimist agrees.

Mr Valtaoja was of the opinion, that we need economical growth in order to get rid of powerty. Mr Soininvaara pointed out, that at some point you should stop striving for more growth. Japan has not had any economical growth in 25 years. We are now craving 5 Earths. If we were willing to cut down 10%, we could make it. At the moment we live in a system that favours playing dirty. It is the task of politicians to rewrite the rules. 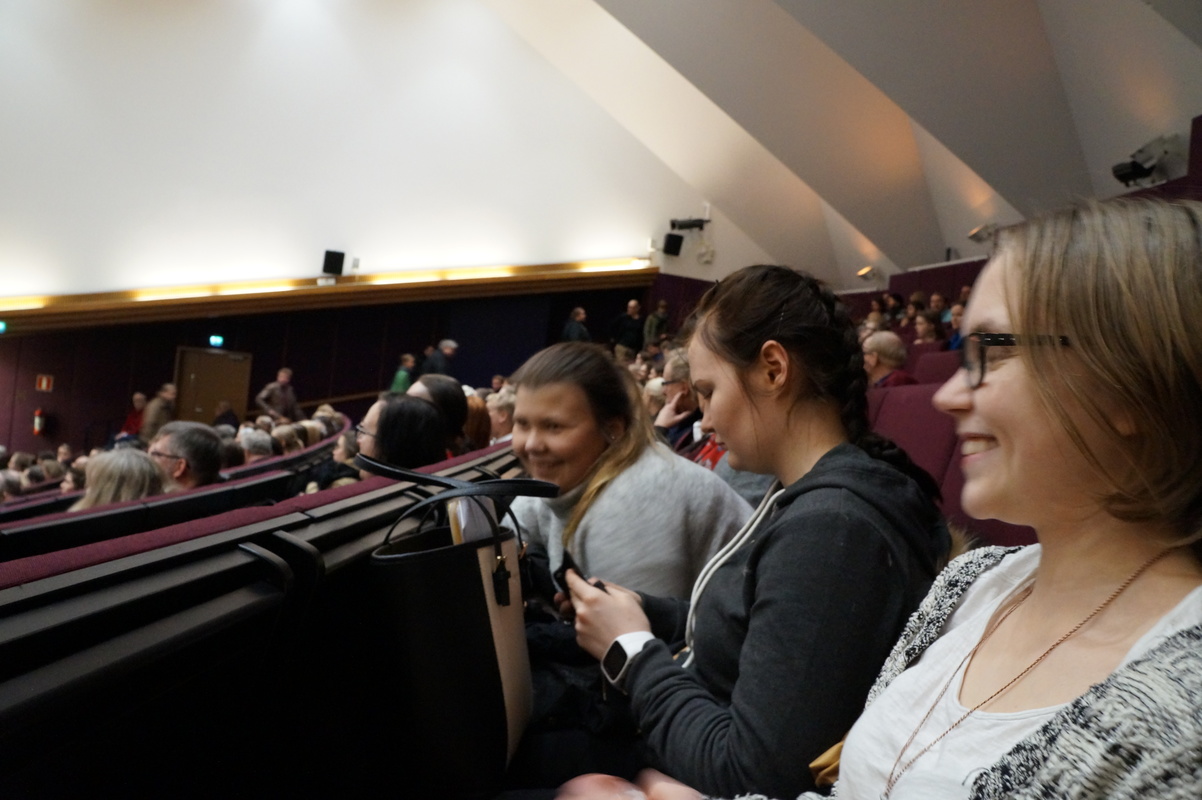 There needs to be a shift from growth in material or energy to growth in information. The problem is that the growth of information is a source of anxiety for many. The picture below calls for new ways of doing things. 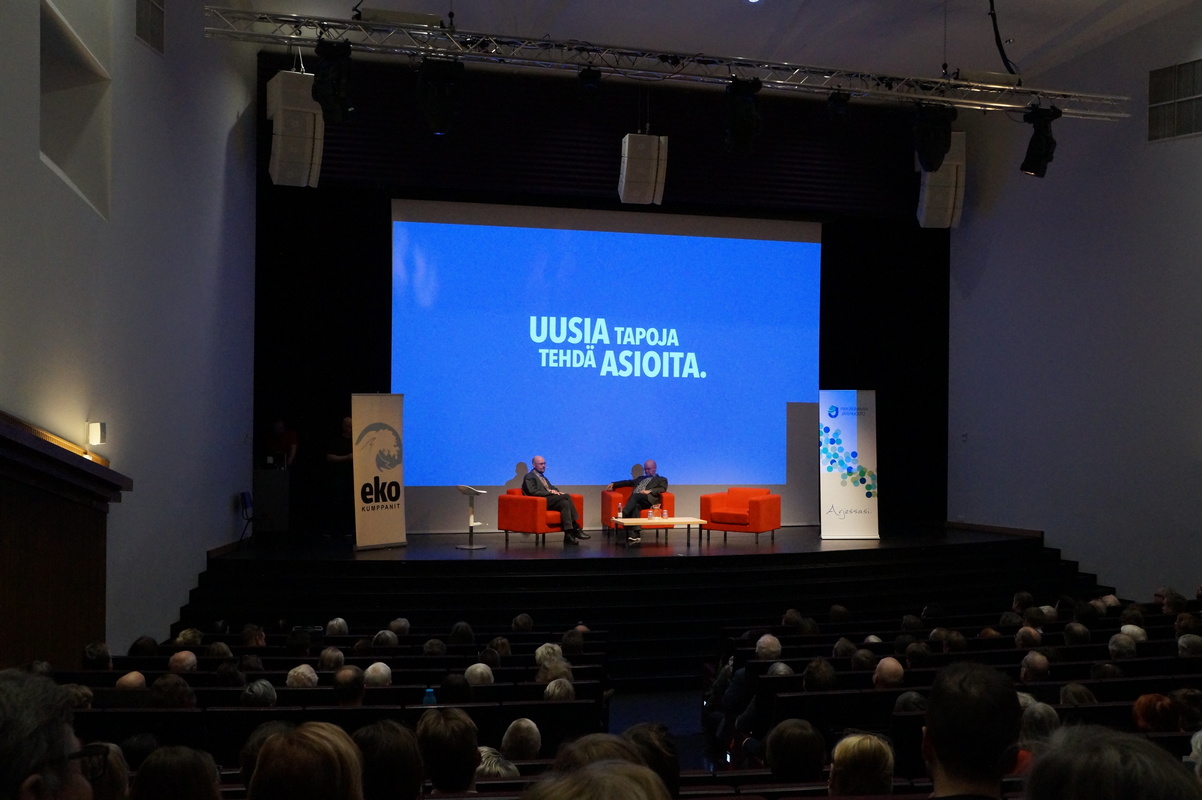 The approach to the subject was perhaps a bit more personal than expected, but our group agreed there were some good points made.
0 kommenttia
Pictures and text coming
0 kommenttia
Kaikki blogimerkinnät
The Danish NGO Crossing Borders is the coordinating partner of the project
Nuoret apuun is a pilot project which we are in with the company Coreorient. We are applying for a grant from the Hundred -foundation
This is the official Homepage of the Eco Entrepreneurship or Eco-hub project
The consultancy Swideas is our Swedish partner
Talkootori is the application which we are testing and developing with the company Coreorient