In our project we used English as a working language. The students interacted with each other, created and gave presentations and worked on assignments in English. They also learned some Finnish and Portuguese during the mobilities and preparing them in making a small dictionary.

In our project there were several assignments to the students which required new ways of thinking.

The world has seen millions of entrepreneurs, some lucky and some less fortunate. Learning about other entrepreneurs helps you to identify the factors behind success and the reasons why some did not succeed. It also helps you to understand that even though success requires a good business idea it also demands a lot of hard work and occasionally some luck. Learning about entrepreneurs who had to struggle long before succeeding reminds a starting entrepreneur that not all but several clouds do have a silver lining.

In our project we met an artist and Cafe entrepreneur from USA in Kauhajoki, who told us his inspiring story about his Cafe and art-ceramics workshop Valkoinen Puu. We learned, that one has to have a clear vision of his business and continue all the time working hard to meet the vision.

An entrepreneur has to be able to sell his/her idea and merchandise not only to customers but also to investors. That would be practically impossible to do, if the entrepreneur has no experience in public speaking and the preparations it requires. When you know how to prepare to these situations and you are able to represent your ideas in an inspiring exciting way, you have already won half of the game.

In our project the students prepared a presentation of their own country and presented it to a big audience of the parents and other students. They also studied solar power applications and gave presentations on them. All the presentations were given in English.


Visiting companies and meeting the entrepreneurs

The students need examples to be able to find out their own business ideas and encourage them to start a business of their own. It’s also important to give the students practical ideas how to run a business.

In our project we visited several companies and met their entrepreneurs. The entrepreneurs told their stories and discussed with the students. The also introduced their functions and properties.

A workshop is an ideal way to learn new ways of thinking, get new ideas and learn to work as teams. Compared to a normal lesson, a workshop is more interactive and activates the students more efficiently. A workshop is a good way to learn to be innovative, which is important in entrepreneurship.

In our project we arranged a workshop on entrepreneurship in Helsinki Think Company with an entrepreneur Tommi Ullgren, who has established and runs several innovation companies. He told us about his innovative ideas and put us to do a Marshmallow challenge, which meant building a tower of spaghetti as a team. This required innovative thinking.

Networks and connections are the basement of any business. Young people start creating their networks in the school and offering them opportunities to meet different people from other schools and other countries is a good way to help them in this process. Efficient ways to build networks is to work as international group and visit companies, embassies etc.

In our project we worked together with the partner school’s groups virtually and physically during the mobilities. The groups of students learnt to know each other and created connections and a network between each other. We also visited several companies and two embassies, where the students talked with the important people, learnt to know them and learnt from their knowledge.

Travelling to a foreign country is a challenge to a young person and meeting the challenge gives the person self-confidence, which is crucial to an entrepreneur. It’s also very important for young people to experience new things in a new context to find new ways to solve problems, which is important in entrepreneurship.

In our project we had two 10-day mobilities with 40 students working together. Since our countries, Portugal and Finland, are situated in the opposite end of Europe, travelling gave us a bit more challenges. Also the differences in our cultures gave us an opportunity to learn new things. 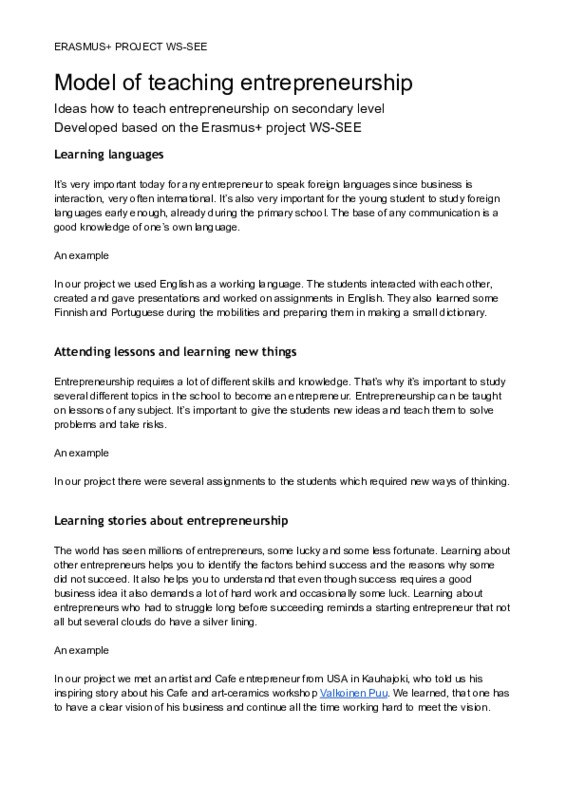