Curved mirrors form images when two rays intersect or appear to intersect. In ray diagrams, we use the following symbols to represent the two curved mirrors: 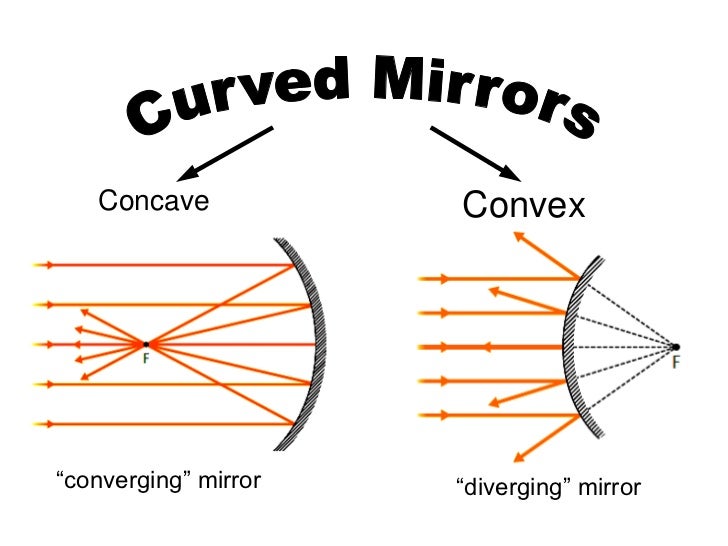 There are four important rays used in ray diagrams. They include:

The ray is reflected along the same path. 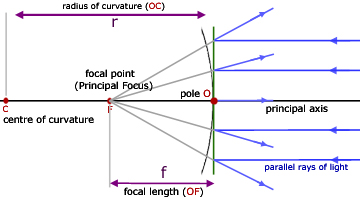 The reflected ray moves parallel to the principal axis (by the principle of reversibility of light).

The ray is reflected making the same angle with the principal axis as the incident ray (i.e <i=<r).

The table below provides a summary of how a concave and convex mirror forms images:

Linear magnification and the mirror formula

Linear magnification is defined as the ratio of the image size to the object size;

Similarly, it can be expressed as the ratio of the distance of the image to the distance v of object u from the mirror. Magnification has no unit.

Suppose an object is placed u cm in front of a spherical mirror of focal length f such that the image is formed v cm from the mirror, then u, v and f are related by the equation;

This equation is referred to as the mirror formula. The formula holds for both concave and convex mirrors.

When applying the mirror formula, it is necessary to observe the following points:

Thus the image formed is real and same size as the object.

2. A convex mirror of focal length 9cm produces an image on its axis 6cm from the mirror. Determine the position of the object.

Determination of the focal length of a concave mirror

The distance between the mirror and the screen is the estimated focal length of the concave mirror.
look at the link below.

Alternatively, the object can be placed in front of the concave mirror at various distances and measuring the corresponding image distances then applying the mirror formula. From the values of u and v, appropriate graph is plotted. There are three possible graphs that can be obtained from the mirror formula. These include:

Rearranging the mirror formula, we have;

Hence a graph of 1/v against 1/u is a straight line having a negative gradient. 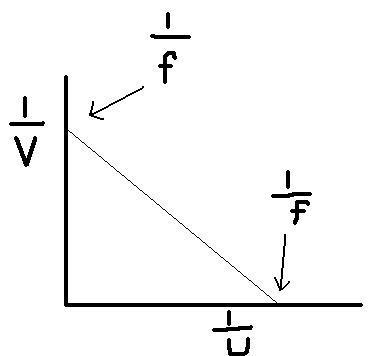 At the y-intercept, 1/u=0. Substituting this in the mirror formula, we obtain;

Similarly, at the x-intercept 1/v=0. Substituting in the mirror formula, we obtain;

If the values of f obtained from the y-intercept and x-intercept above are different then we determine their average.

From the mirror formula, we have;

Hence a graph of uv against u+v is a straight line through the origin whose slope gives the focal length of the mirror.

Also from the mirror formula, if we multiply through by v, we obtain:

Rearranging the equation we have;

Hence a graph of magnification M against v is a straight line whose slope is equal to 1/f and y-intercept is -1.

Concave mirrors are used by dentists to magnify teeth during extraction and as a shaving mirror. In both cases, the mirror forms upright and magnified images. Concave reflectors are also used in projector lamps, solar concentrators and telescopes. 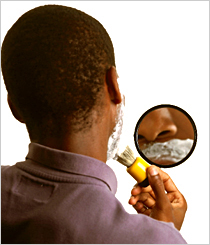 Convex mirrors can be used in supermarkets to monitor customers’ activities and as driving mirrors in cars and motorcycles. This is because convex mirrors provide a wide field of view compared to a plane mirror. 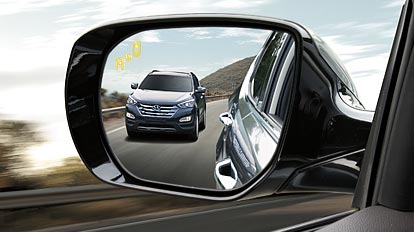 However, a convex mirror used as a driving mirror has one limitation. It forms a virtual diminished image which appears to be farther away from the observer than it actually is. This may lead to misjudgment by the observer which can result into accidents.