Pressure is defined as the compressive force acting normally per unit area;

The SI unit of pressure is newton per square metre (N/m2). Pressure can also be expressed in pascals (Pa);

Atmospheric pressure is sometimes expressed as mmHg, cmHg or atmospheres.

For a given amount of force, the smaller the area of contact the greater the pressure exerted. This explains why it would be easier for a sharp pin to penetrate a piece of cardboard than a blunt one when the same force is used.

A solid resting on a horizontal surface exerts a normal contact force equals to its weight. The pressure of the solid on the surface depends on the area of contact.

The pressure between two solid surfaces depends on two things:
(a) the force between the surfaces
(b) the area of contact between the two surfaces.

A fluid is a term that refers to either liquids and gases. The set up below can be used to illustrate pressure in fluids:

Pressure in fluids increases with depth i.e. the greater the depth the higher the pressure it exerts.

This explains why the walls of a dam are made wider downwards.

A diver under water experiences pressure due to the weight of water above him plus the atmospheric pressure above the water surface. The deeper the diver, the greater the pressure.

When a liquid is poured into a set of connected tubes of different shapes, it rises up until the levels are the same in all the tubes. Consider a liquid of density ρ in a container of uniform cross-section area A, such that the depth of the liquid in the container is h 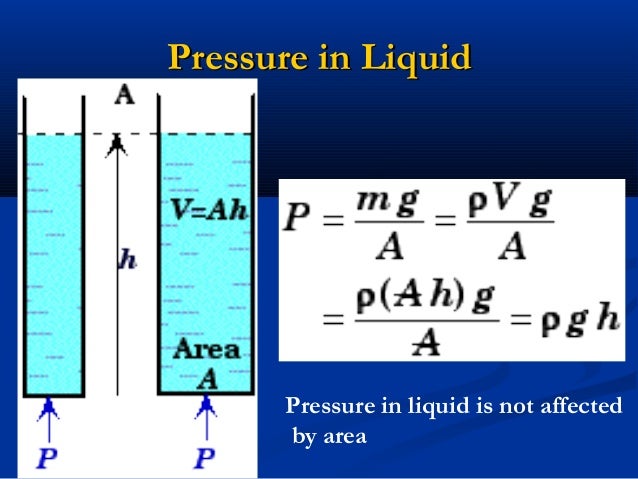 Volume of the liquid = A*h

From the definition of pressure, P= F/A

It is thus clear that pressure in fluids is directly proportional to the height of the column h, the density of the fluid ρ and the gravitational field strength g.

Note: Pressure in fluids does not depend on the cross section area of the container which holds it.

Transmission of pressure in fluids

The figure below shows a liquid under pressure due to the force F acting on the plunger. 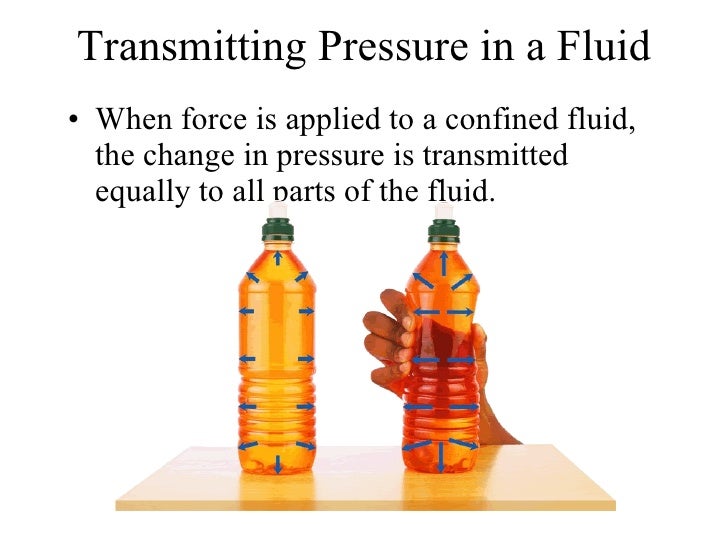 Assuming that the holes are identical, when the plunger is pushed forward, the liquid squirts out through the holes with equal force. If the piston area is A, then the pressure developed is F/A. this pressure is transmitted equally to all parts of the liquid. This is called Pascal’s principle. The principle states that pressure applied at one part of a liquid is transmitted equally to all other parts of the enclosed liquid. Gases can also transmit pressure in a similar way provided they are incompressible.

see a clip in the link below

The working of hydraulic machines is based on Pascal’s principle.

The can is filled with water then heated for several minutes. After sometime, the can is sealed and then cooled by running cold water over it.

When the water is heated, steam is produced which displaces air in the can. When cold water is run over it, steam condenses leaving a vacuum in the can. Pressure inside is thus reduced below the external atmospheric pressure. Hence the can crushes inwards. 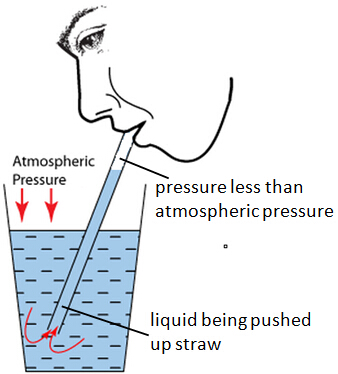 Atmospheric pressure is measured using an instrument called a barometer. The following are some types of barometers: With the liquid column h, the atmospheric pressure can be determined from the equation;

Where h- is the height of the liquid column

ρ- Density of the liquid (mercury)

At sea level atmospheric pressure can support approximately 760mm column of mercury equivalent to approximately 10m column of water. Mercury is thus preferred as a barometric fluid since it gives a shorter and measurable column compared to water. 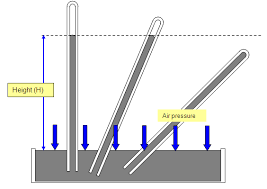 Note that this barometer is not readily portable.

This is a U-shaped tube open on both ends. One end is connected to a source of gas whose pressure is to be determined. The other arm is open to the atmosphere. This creates a pressure difference which displaces the manometer liquid.

The points 2 and 3 are at the same level and as such experience the same amount of pressure. The pressure at 2 is the gas pressure while that at 3 equals the pressure due to the liquid column plus atmospheric pressure;

The fixed ivory index with a sharp point acts asthe zero mark of the main scale. Before taking any reading the level of the mercury in the reservoir must first be adjusted until the tip of the ivory index just touches the surface of mercury.

The height of mercury column is then read from the main scale .this reading is then used to calculate the pressure at the place. Any change in the atmospheric pressure causes the level of mercury in the reservoir to move up or down, hence the adjustment of the ivory index is necessary.

This type of barometer is more portable.

Pressure gauges are also easily portable. It is commonly used to measure gas pressure, tyre pressure, etc. It consists of a coiled flexible metal tube. When the pressure inside the tube increases, the tube uncoils. The movement of the tube is magnified by the lever and gear mechanism which then moves the pointer across the scale.